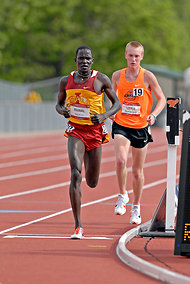 For the first time at the Olympic Games, competitors without a country will compete. The International Olympic Committee (IOC) granted approval for a South Sudanese competitor to compete at the 2012 Olympic Games in London, to commence on July 27.

Guor Marial will run as an independent athlete in clothing without a country flag or identification. He will race under the Olympic flag. The 28-year-old will compete in the marathon which takes place on August 12.

Marial’s country of birth, South Sudan, gained independence a year ago and is yet to form a national Olympic committee. His country of current destination is America. Marial, a permanent resident in America, is in the process of gaining American citizenship. However, he is not yet a US citizen and cannot therefore run under the United States flag.

The IOC told the sports minister of South Sudan, Cireno Hiteng Ofuho, that for South Sudanese competitors and teams to compete at The Games, they would have to compete under the Sudan flag. This was because, according to strict IOC rules, a country needs two years to register.

Guor Marial reached the Olympic qualification time for the marathon in October 2011 and has since improved his personal best time in San Diego in June 2012, finishing in two hours 12 minutes and 55 seconds (2:12:55). The Olympic men’s marathon record is 2:06:32, set by Kenyan runner Samuel Kamau Wanjiru at the 2008 Olympics. The world record of 2:03:38 belongs to Kenyan runner Patrick Makau at the Berlin Marathon on 25 September 2011.

The IOC made a decision regarding Guor Marial on July 20 to enable him to compete. Three other athletes from the former Netherlands Antilles will also compete under the Olympic flag.

South Sudan became a United Nations and African Union member this year, and joined the international football federation FIFA. They played their first international friendly against Uganda on July 10, a day after celebrating their first anniversary of independence. Known as the Bright Stars, coached by Serbian Zoran Djordjevic, the team drew 2-2 with Uganda. FIFA permitted South Sudan to qualify, but the IOC’s regulations are much stricter.

Martina Nicolls is the author of The Sudan Curse