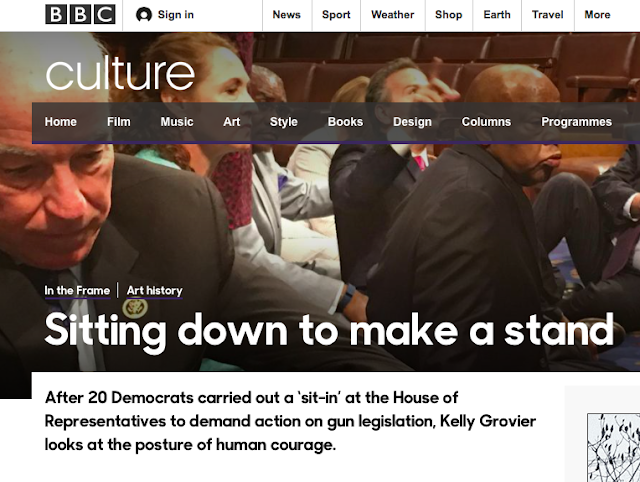 In the Culture section of the BBC appears an article published on 24 June 2016 with the headline: Sitting down to make a stand. What does ‘make a stand’ mean?

Who is defending what against whom? And what does standing have to do with sitting down?

The article explains that congressmen and women held a ‘sit-in’ on the floor of the United States House of Representatives during the week to ‘demand action on gun legislation.’ Initiated by civil rights leader, John Lewis, on Wednesday 22 June, 20 Democrats left their seats and sat on the floor in an effort to prevent an adjournment of Congress to 4 July before members could vote on legislation to tighten federal gun laws. ‘The extraordinary action’ was taken after the Orlando Florida gay nightclub killings in which 49 people were gunned down.

The congressmen and congresswomen were ‘lounging in political defiance.’ The reporter compared the scene with sketches by British war artist Henry Moore (called Shelter Drawings) during the air raids in World War II. This is the reason why the article was in the Culture section and not the Politics section of the online news journal. Was the comparison a bit extreme?

The article asks readers to ‘reflect on the very posture of human courage.’ This was a peaceful sit-in. The reporter writes that ‘the postures chronicled in these images are reminiscent … of the awkward ergonomics of a bravely embattled people, who hunker in determination that they will survive the next assault.’ Hunker means ‘to squat or crouch low.’ Therefore the parliamentarians were sitting or crouching to ‘make a stand’ against gun laws. The act of sitting, instead of standing and walking around with signs and posters, is a show of non-aggression. They are not making themselves bigger and taller and stronger – they are making themselves smaller, but no less defiant.

The Scorecard for the BBC headline is 100%. The article is not directly reporting on the issue or its outcome, but on the posture of a defiant but peaceful protest. The action of ‘sitting’ is in focus here, as the parliamentarians ‘make a stand’ – i.e. make a determined effort to defend their views. It is a contrasting and effective use of opposing images to reinforce opposing opinions.

September 21, 2011
It is now springtime in Australia. But two hours from the spring flower festival, Floriade, in Australia’s capital, Canberra, snow is still falling in the Snowy Mountains. The ski season is from early July to mid-September, but in most years there is still good skiing until mid-November on the Kosciuszko main mountain range. The world’s longest continuously running ski club is in Australia. Three Norwegian miners introduced skiing to Australia in 1861 during the Gold Rush period in New South Wales. They constructed skis from natural wood and established the Kiandra Snow Shoe Club. In 1908 the town of Kiandra hosted the world’s first international Alpine Ski Carnival in which Denver skier, Charles Menger, from America, won the main event. Kiandra nowadays is not a ski resort, having died out after the Gold Rush. However, the Kiandra Snow Shoe Club was re-named the Kiandra Pioneer Ski Club and is based in a town called Perisher, two hours from Kiandra. Perisher, in the state of N
2 comments
Read more

In the City by the Sea by Kamila Shamsie: book review

November 22, 2014
In the City by the Sea (1998) begins on the roof of Hasan’s house in Karachi, Pakistan. Hasan is 11 years old, living with his artistic mother, Ami, and his lawyer father, Aba. “The family’s unspoken rules had it that this was Hasan’s territory, as sacred as Ami’s studio or Aba’s crossword-chair.” On the roof Hasan observes a young boy on a nearby roof, kite flying, “not for one moment turning [his] eyes away – not to blink at the sun … not even to watch for the roof to end.” Hasan sees the boy fall. The boy’s fall becomes a constant image in Hasan’s head. “The time it took him to fall from roof to ground seemed an eternity, longer and longer each time Hasan replayed it in his mind.” Hasan feels guilty. He thinks the boy’s fall to his death is his fault: “getting so involved in making the kite fly, because he knew I was watching.” Hasan’s uncle, Salman Mamoo, whom Hasan idolises, tells Hasan, “before I wanted to be a cricketer, I wanted to be an astronomer.” Bu
1 comment
Read more